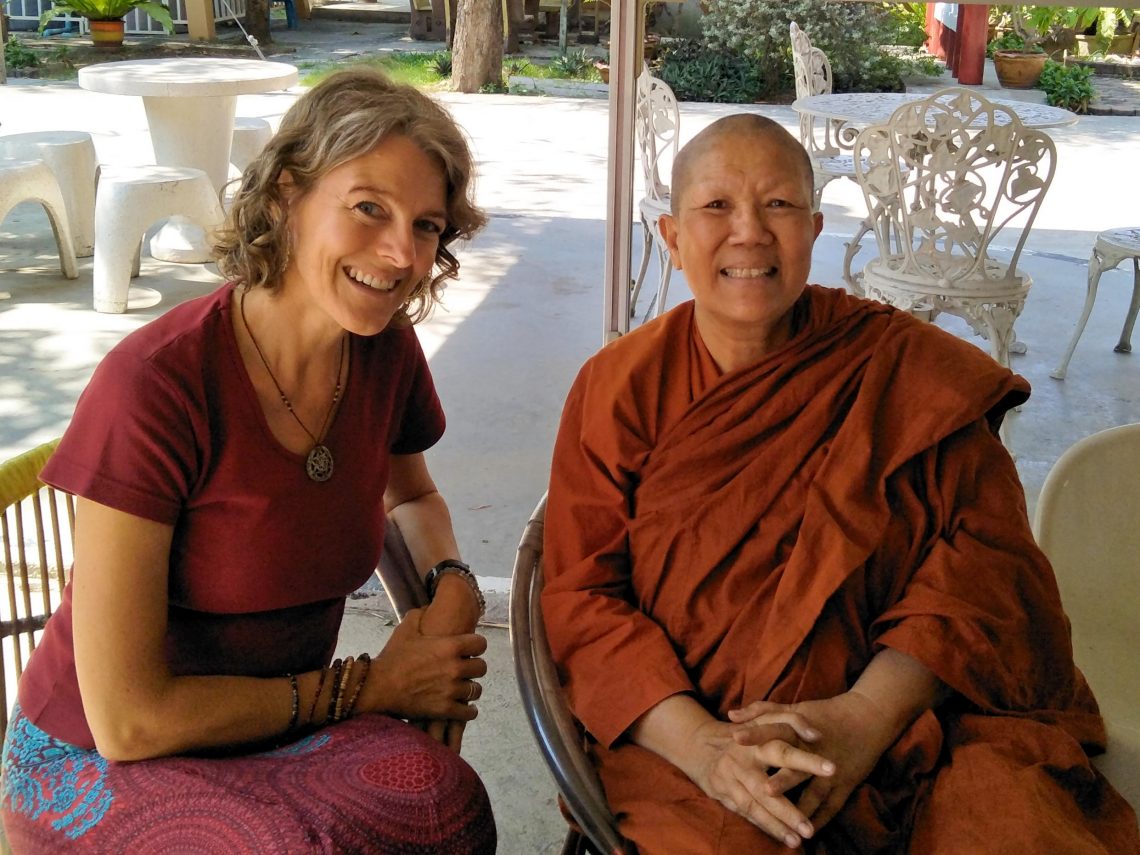 “How does a feminine approach to Theravada Buddhism look like?” is my question, when I arrive in the first ever Theravada Buddhist monastery for women, Wat Songdhammakalyani, near Bangkok in Thailand.

The answer I receive over a cup of tea with the abbess, Venerable Dhammananda, and one of the sisters, Luang Pi Punna, is two-fold: “There is only one teaching of the Buddha. And this applies to all human beings. The distinction between man and woman is only one of perception. First you need to go beyond this kind of conditioning.” No frills, no doubt. Clearly the nuns are first of all disciples of the Buddha. And the Dhamma is genderless!

At the same time the welcoming atmosphere in which the random visitor is received, the kind-heartedness and the astonishing genuine attention are illustrating beautifully an equally important truth: “Even though the teaching is the same, the outcome, the living expression can be different from person to person and from abbot to abbot.” Mother Abbess, as she is lovingly called from her community, smiles warmly and with a twinkle in the eye.

Dhammananda is firm and clear in her teachings, but incredibly humble and generous at the same time. There is no emphasis of her status, nor any trace of patronising or lecturing in the downright casual conversation with what is a well-known and highly revered 74-year old former university scholar, who has travelled the world for many a congress and meeting with advocacy groups on Women in Buddhism.

With her gentleness and grace Venerable Dhammananda is radiating the archetype of the Mother with all her being. “Our way of doing things as women can be very different from men. Women tend to be much softer, they often have more of the ability to compromise and to include.” 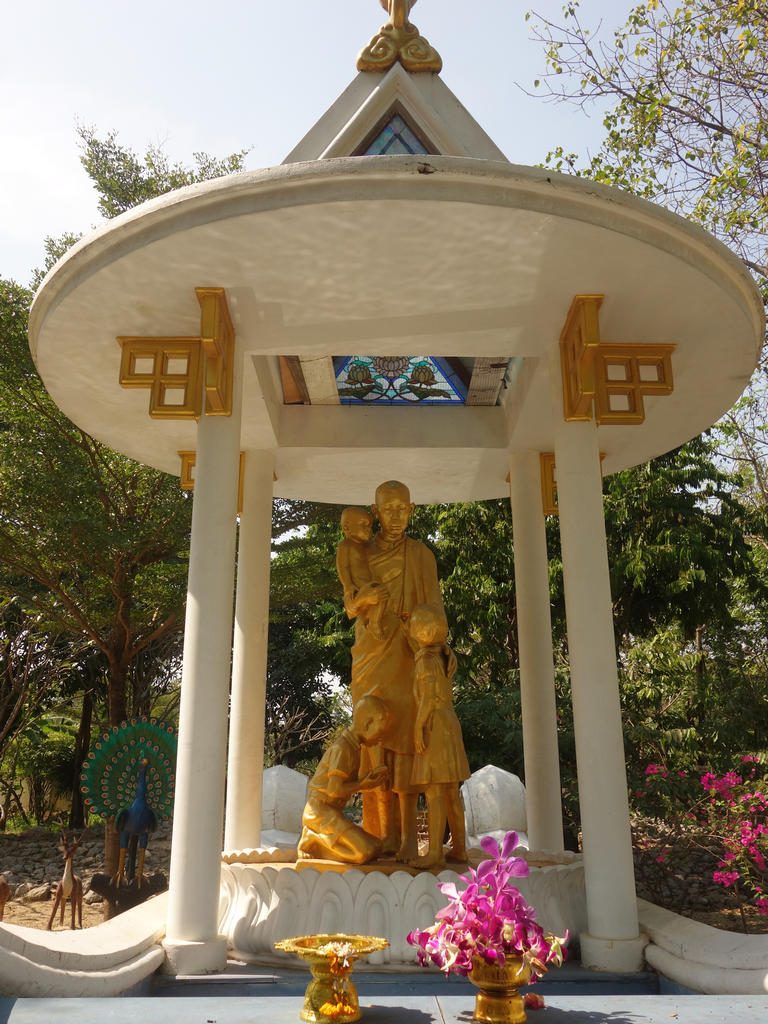 On a practical level this means, that the nuns run Wat Songdhammakalyani with a strong focus on environmental awareness and also reach out to the community in the neighbourhood with social activities. It’s the path of the Bodhisattva, a legacy of Dhammananda’s mother, Venerable Ta Tao Fa Tzu, who was effectively the founder of the monastery, but started off in a Taiwanese Mahayana Buddhist lineage.

“Do not only become the mother of your actual children, said my mother”, Dhammananda remembers. “Be the mother of the world. That’s what the world needs.” And she continues: “We as women have such a great quality in embodying the mother. But of course it is not only us who can develop this type of feminine qualities – men can also have it. My father was taking care of me with lots of love and lots of nurturing.”

Caring about nature is one way this shows up in the humble monastery on the outskirts of Bangkok: Organic farming, mindful water consumption, recycling and generally reusing the given resources as much as possible are part of the daily life.

Role model for the public

“We try to set a role model for the public to make them aware of the need to recycle. We encourage them to bring their paper and plastic waste as an offering to us to make merit for themselves.” Leading by example the monastery has also set up a small city farm to inspire the visitors to grow their own vegetables even if it would be in the small veranda of their apartment or condominium.

And then there is the “socially engaged Buddhism” part of their activities. In the first few years in the history of the monastery Dhammananda and the sisters focused on giving proper information about the ordination of women in the Buddhist lineages. “Now we are extending our hands to reach society.”

The nuns are visiting Nakhonpathom provincial prison as a first social project. Apart from talks and teachings they share the surplus from the temple donations like shampoo or soap with the inmates.
Care for community health is next on the agenda of the nuns.

Endurance as a female quality will save the planet 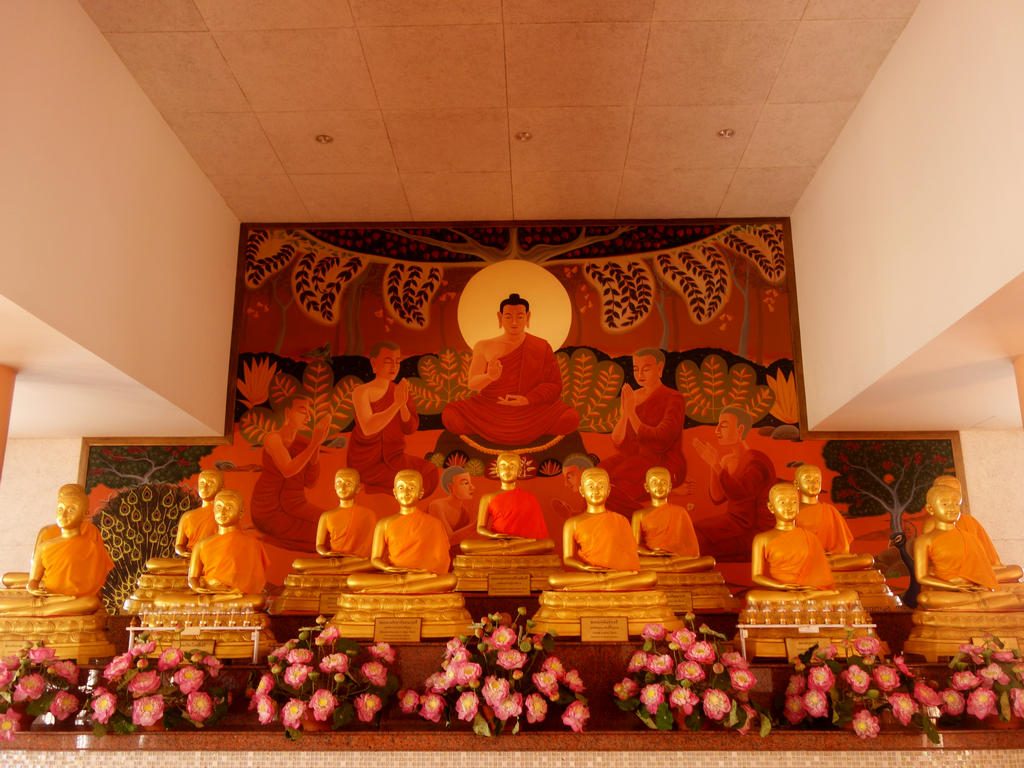 “We women tend to have much more of the endurance that is needed in this world. We have the gift to do what is necessary for the survival of the family and for the survival of the planet”, says the Mother Abbess and talks about the sacrifices that particularly mothers are willing to make in their lives to ensure that the children or else their creations are flourishing.

“You know, what I find very intriguing are the Chinese characters for endurance: It is symbolised through a knife cutting a heart! It means to me that even in very difficult situations women are known to muster the endurance that is necessary to thrive.” This might be one of the reasons why enlightenment is said to come through the feminine side of the being.

Practice in the right way

Another form of this feminine quality of endurance is the ability to sit and trust, says sister Luang Pi Punna. It’s not an endurance that is designed to gain or attain something. On the contrary: “When you start, all you do is practice in the right way and then everything else will come”, says the nun. “You put the work that is required into your project or your practice, but at the same time you let go of any effort, any striving or competing.”

“When I practice it is like I take care of a plant. I don’t even want it to flower”, she says. “Still I will put the soil, some fertilizer, some water – because this is the right way of doing it. And then I just sit and trust. When the temperature and everything else is suitable, the flower and the fruit will reveal themselves. Just like that.” A very soft and gentle approach, which can easily be forgotten in the practice of the achieving mind that rules the male dominated Western world. “It is the approach of the Buddha himself with no difference for men and women.” 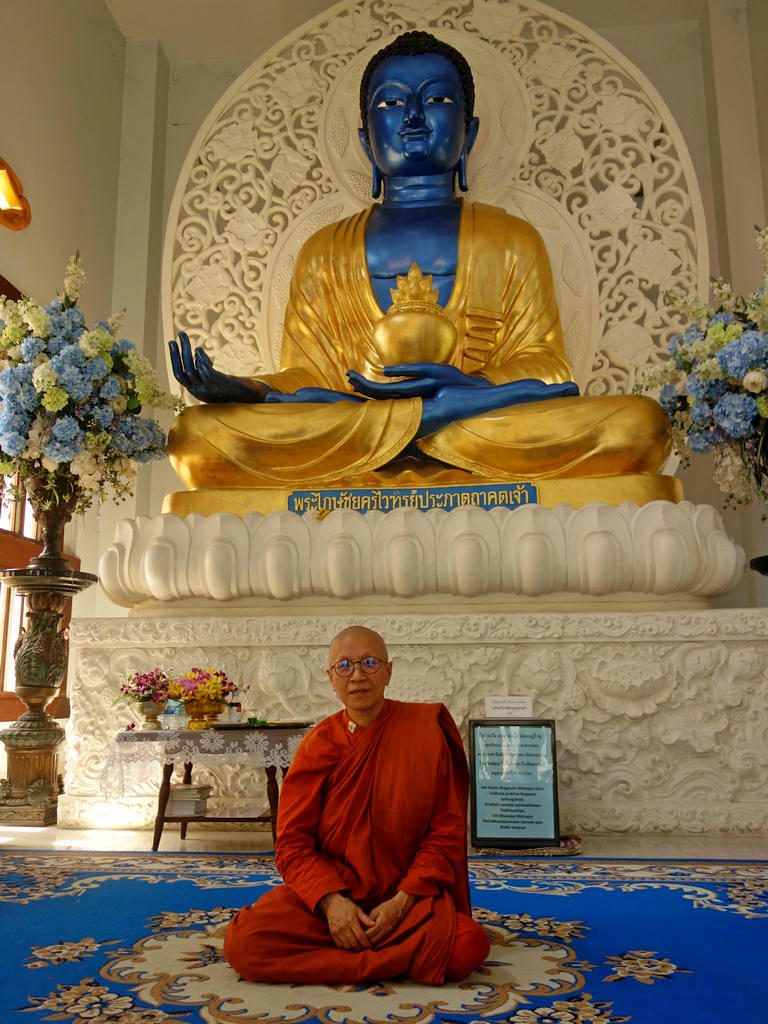 Much in the same way Venerable Dhammananda and her fellow sisters deal with the utterly conservative Thai Sangha. “We are doing our thing. [Which is ordaining women into the Theravada Buddhist lineage.] And they cannot do much about it.”

The Supreme Sangha Council, the ruling body of Theravada Buddhists in Thailand, keeps quoting that the original lineage of the Bhikkhuni order which according to tradition is needed for the ordination of female monks, died out long ago. Hence any ordination undertaken in Thailand would not be legitimate, is the line of argumentation.

There is even a Buddhist order that since 1928 has forbidden the ordination of women. The country does not recognize female monks or novices.

Venerable Dhammananda herself went to Sri Lanka in 2003 to take the robes in the uninterrupted female Theravada lineage of the country. With this she became the first Thai woman to be ordained in a Theravada monastic lineage. Ever since her mission is to support women who wish to follow on that same path. Songdhammakalyani Monastery is already in the position to give ordination to female novices, which they do regularly twice a year in April and December. So far, there have been 795 women being ordained in the last ten years!

For the full ordination as Bhikkhuni women still have to travel to other countries though. This January a group of eight sisters went together with Mother Abbess for the full ordination to India, to be precise to Bodh Gaya itself, where the Buddha is said to have attained enlightenment under the Bodhi tree. One of the women being ordained there was Luang Pi Punna, the sister who led me around the monastery during my visit.

More and more mainstream media report about the movement, which is gaining quite a bit of momentum in recent years: “Although far fewer than the approximately [300,000] male monks, the Bhikkhuni are gaining strength both in numbers and public support, despite the official rejection. They are also becoming agents for reform of a religious establishment plagued by corruption and lurid scandals, and run by an ossified body of aged men who forbid elevation of women from ordinary nuns to a status equivalent to that of monks, or bhikkhu”, writes Nikkei Asian Review in August 2017.

“You know, it is all in the text”, says the Mother Abbess, who is called a “renegade nun” or “defiant rebel” in some of this media coverage. But it’s not a rebellion against the teachings, it’s merely a standing up against the way these texts are interpreted and used today. And Venerable Dhammananda should know – having been a scholar, teaching at the renowned Thammasat University in Bangkok in the Department of Philosophy and Religion for 27 years before becoming a monastic.

After high school, she had studied B.A. in Philosophy from Visva Bharati University, Santiniketan, India; M.A. in Religion from McMaster University, Canada; and Ph.D. in Buddhist Studies from Magadh University, India. After all these decades of study and practice, there is no doubt for her: “Women were clearly allowed to be ordained by the Buddha himself. Just read the text!

The beauty of Buddhism

“In fact this is the beauty of Buddhism”, says Dhammananda and with this quotes the title of her latest book. One of more than 20 publications she has written in Thai and English, more than 50 titles translated – many about the role of women in Buddhism. “The Buddha stands for equality”, she emphasises. “Equality in regards to caste and race and gender, which was a real revolution in India at the time. It meant liberation for every human being. And it does until this day. This is indeed the beauty of Buddhism.” 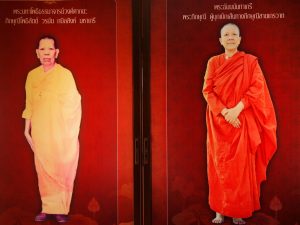 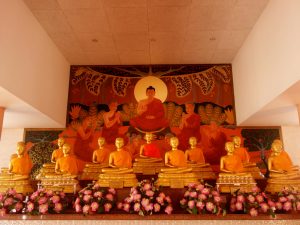 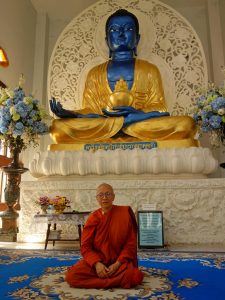 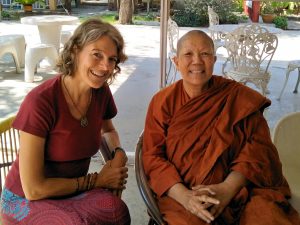 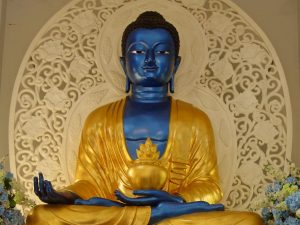 Medicine Buddha, which appeared in this form in Dhammananda’s dreams

Quotes from the Mother Abbess

“I do not choose to be ordained because I want people to recognise me. [sic] I did it because I want to carry on the heritage of the Lord Buddha. I am trying to revive the four pillars of Buddhism—Bhikkus, Bhikkhunis, laymen and laywomen—that will sustain the religion into the future. I don’t mind if some people reserve different opinions about Bhikkhunis. The public will be the ones to judge our worth.”

“I would be satisfied if I could serve as a refuge for women. I am not aiming at a big market. I don’t think Thai women will rise up and get ordained en masse. A monastic path is not a comfortable lifestyle. I am thinking of a small religious community which helps women develop their own spirituality and contribute something to society.”

“I know there is some resistance out there. It is not my intention to stick out and provoke anybody. I will try to honour everyone. I will try to be a supatipanno, to be a female monk with good conduct. Time will tell. If society believes this is a worthy role, then people will support it and consider it another alternative for women.” 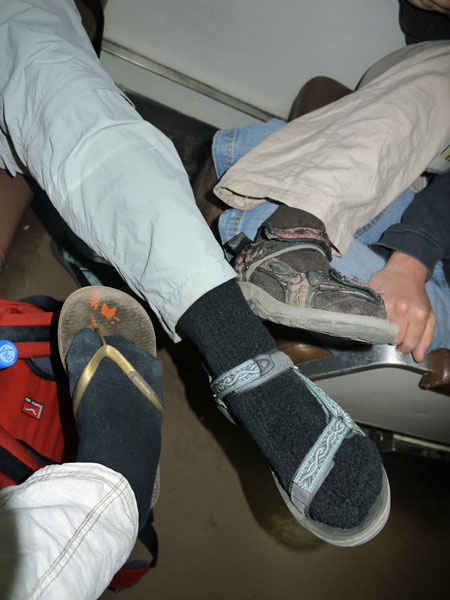 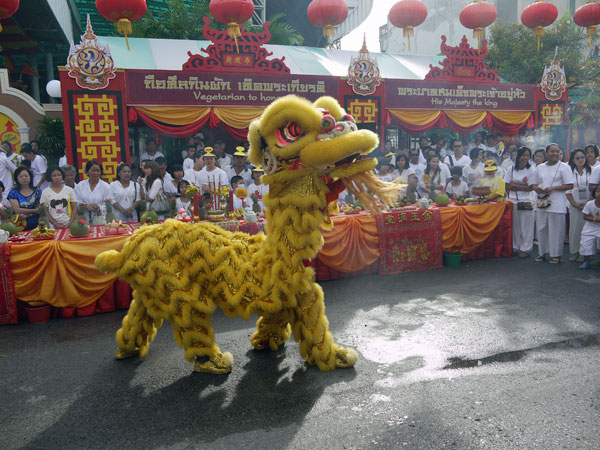 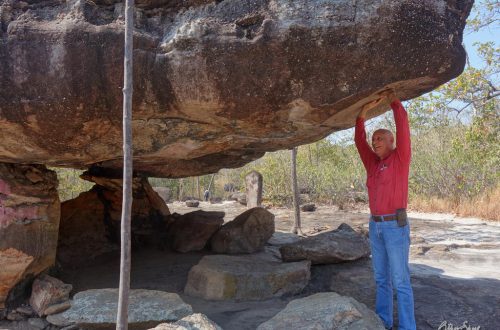