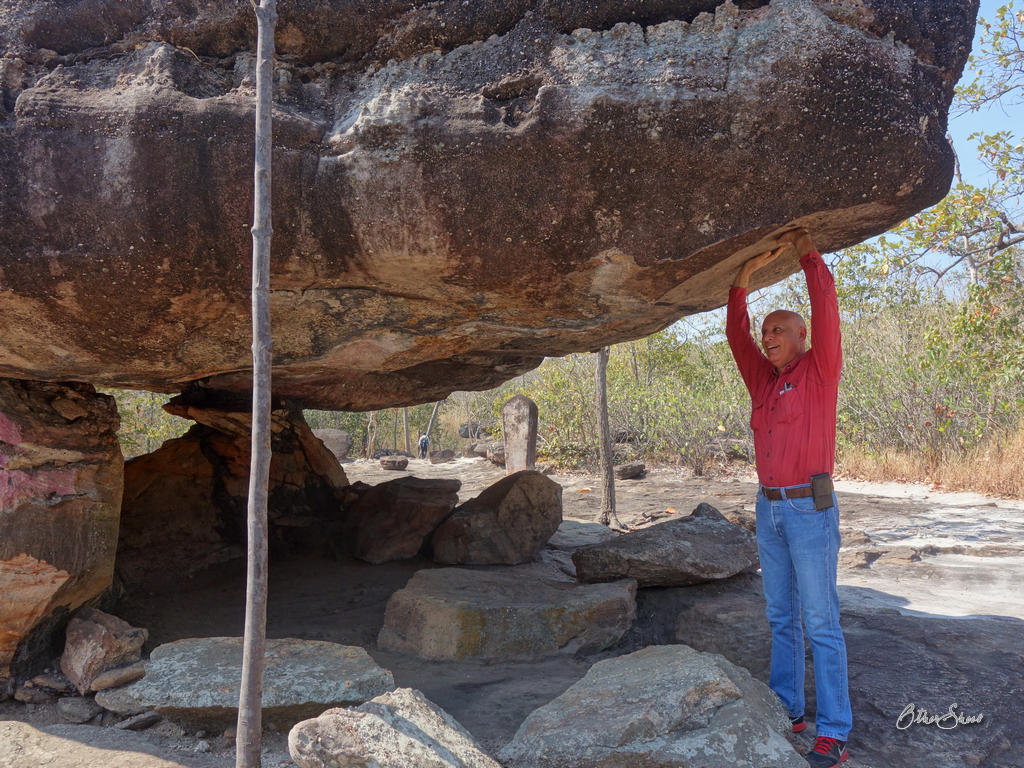 The wondrous stone formations of Phu Phrabat invite the curious and fanciful visitor on a journey into history and mystery of the Isan people. The invitation is to look beyond the sheer rock figures and dive into a plenitude of stories about what must have been a sacred land for many centuries if not millennia.

To start with there is the tale of Nang Usa – as a baby girl happily adopted by a childless king, as a teenager kept safe from the men’s world in a remote forest hermitage, nonetheless found and loved as a young woman by the prince of a neighbouring land. A story which offers the full range of human fate and emotion. And Julian, our guide of the day, Nong Khai’s very own well of knowledge and abode of love for the region, takes us right into it: He flinches and sighs, growls and shrugs, smiles and whispers. 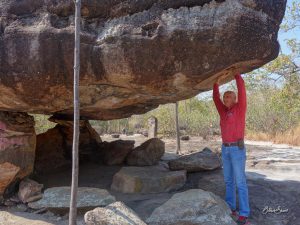 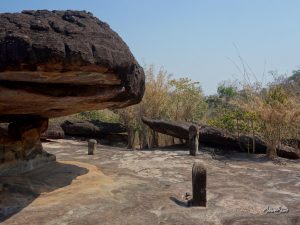 A sacred place in ancient times 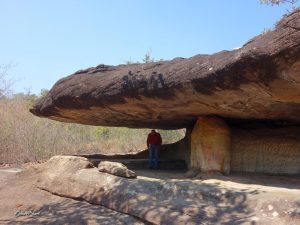 Julian at his best storytelling 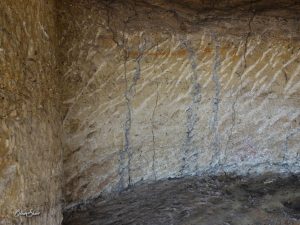 Traces of the chiseling 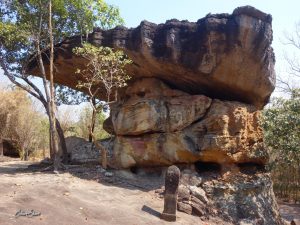 Many a sacred place 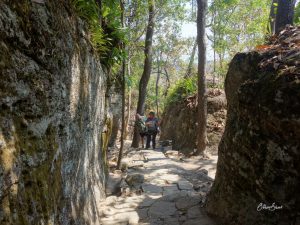 Hiking up the hill

Nang Usa and her lover, prince Tao Baros, are not meant to live happily ever after though: Her adoptive father Phaya Kong Phan comes to claim her back and fight off the prince. Upon advice of the hermit the men end up in a temple building competition which the allegedly more modest prince is winning. It can be seen as an allegory on the pompous edifices of the old Khmer empire and the connected worship of many a God which competed with the smaller and more simple abodes and beliefs of the Buddhist devotees at some moment in Isan history, Julian explains.

Still no happy end after Tao Baros takes Nang Usa home to his kingdom. Turns out he had been cheating in the competition, and the envious ladies at his court spin an intrigue, that ultimately leads to a yearlong separation of the newlyweds followed by misery, sickness and death of everybody involved. With rising voice and expressive face Julian illustrates the jealousy and the despair, the joy and the delight that led the heroes to their actions in our story.

Now the stone formations come to life: Starting from the stables where the prince had tied his horse, when he first arrived to find Nang Usa in her hermitage, the place where his small entourage worriedly looking after him parked their mounts to the larger stable dedicated to the King’s army coming to the rescue of the beloved daughter.

The burial site of king, prince and princess 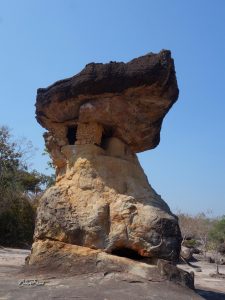 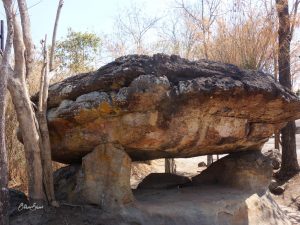 Coffin of the princess 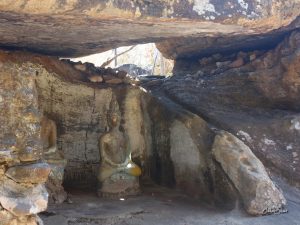 Some Buddha images are well preserved… 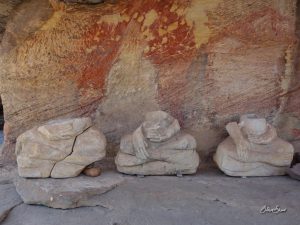 …others have lost their heads in a Chinese invasion 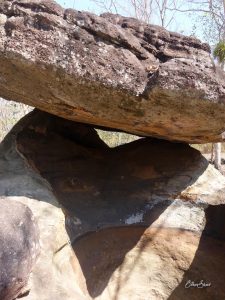 Light and shadow form a heart under this rock 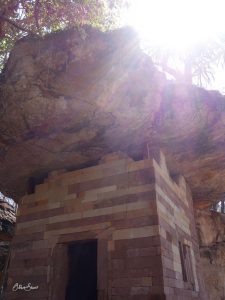 The small temple of Tao Baros 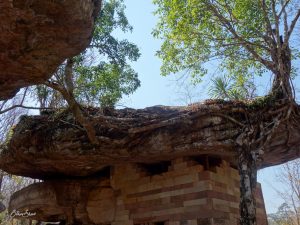 Fig trees growing on top and between the rocks 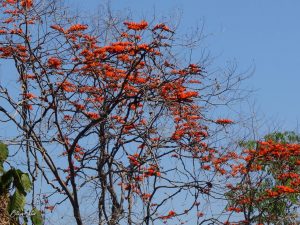 Further up the hill the curious visitor can admire the stone tower in which Nang Usa had spent her days in the hermitage and which became the love chamber right after the prince and her had laid eyes upon one another (delicate smile and twinkle on Julian’s face). Nearby the love tower is the tiny temple we imagine having been built by the prince. To spark the visitor’s fantasy it has been lovingly renovated by Thai archaeologists, and wonderfully embraced by some creative fig trees.

The structure Usa’s father might have built in the plains below the mountain remain subject to our imagination. No remains of any foundation or such could have been found. The view into the Udonthani countryside is worthwhile the climb anyway. What is handed down instead are the stone representations of all the coffins – one each for father, prince and princess. 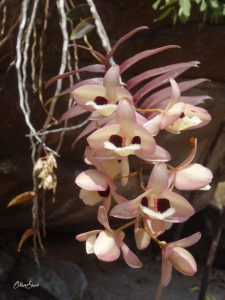 Orchids flowering in a hidden place 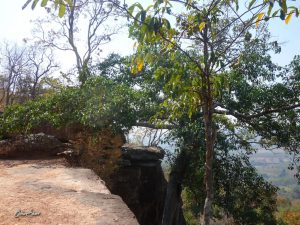 Cliff with a view 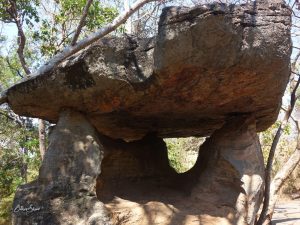 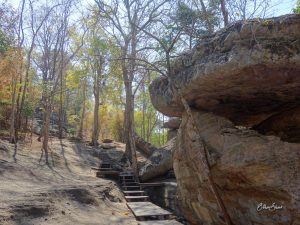 Walkway in the park 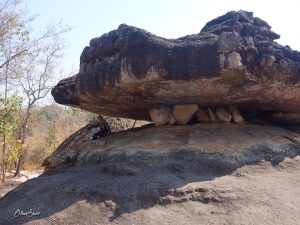 Resting in the shade 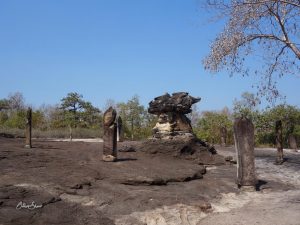 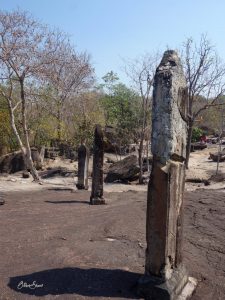 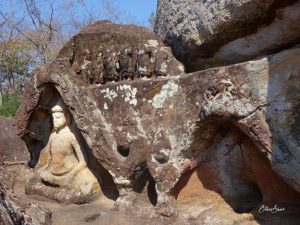 Buddha images in some of the caves 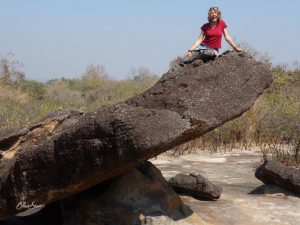 Climbing sacred rocks is not allowed! 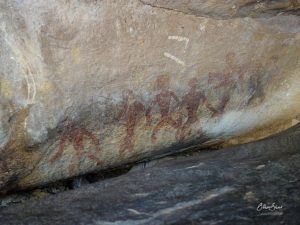 Most natural formations in the Historical Park are surrounded by a circle of man-made stone stelae of varying size, indicating that regardless of the folk tale Phu Phrabat has always been a place of sacred ceremony in ancient times. It’s said that the pillars date from 7th to 10th century. Some Buddha statues mark the arrival of Buddhism in the area. Lingam and Yoni sculptures show the Hindu influence.

And yet another layer of well preserved history of the mountain shows the early settlement of hunters and gatherers: They documented their achievements with prehistoric paintings on some of the cave walls. They are believed to be thousands of years old.

Phu Phrabang – a curious place shrouded in mystery, which is best uncovered with a passionate storyteller and guide by your side. Thank you, Julian, for taking us out and making history so exquisitely alive for us!

You can find the full story of Nang Usa as told by Julian on the website of his Mut Mee Garden Guesthouse:
www.mutmee.com/040020_tale_of_nang_usa.htm

More information about the Historical Park is on this page:
www.mutmee.com/040010_historical_park.htm

Mut Mee Garden Guesthouse in Nong Khai does also offer a map that tells you how to get there. It is a beautiful place to stay over or just hangout to plan the trip. It’s a one stop shop for all you need to travel this part of Isan. 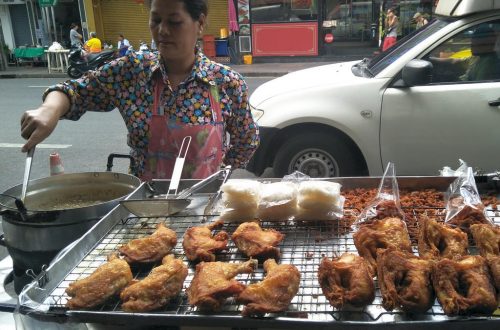 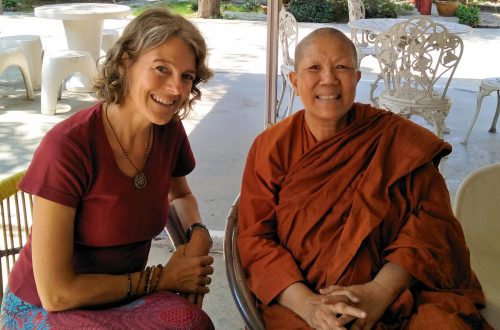 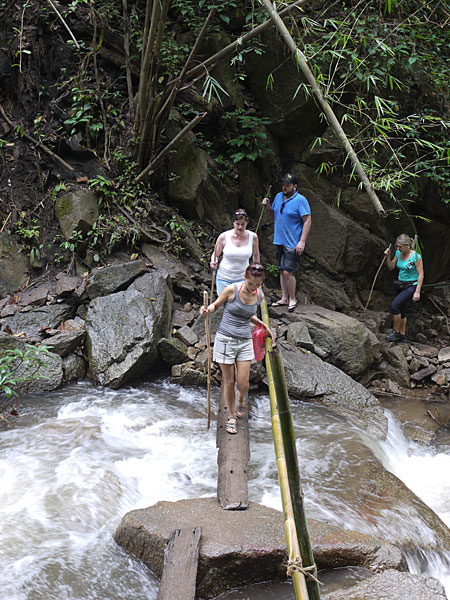