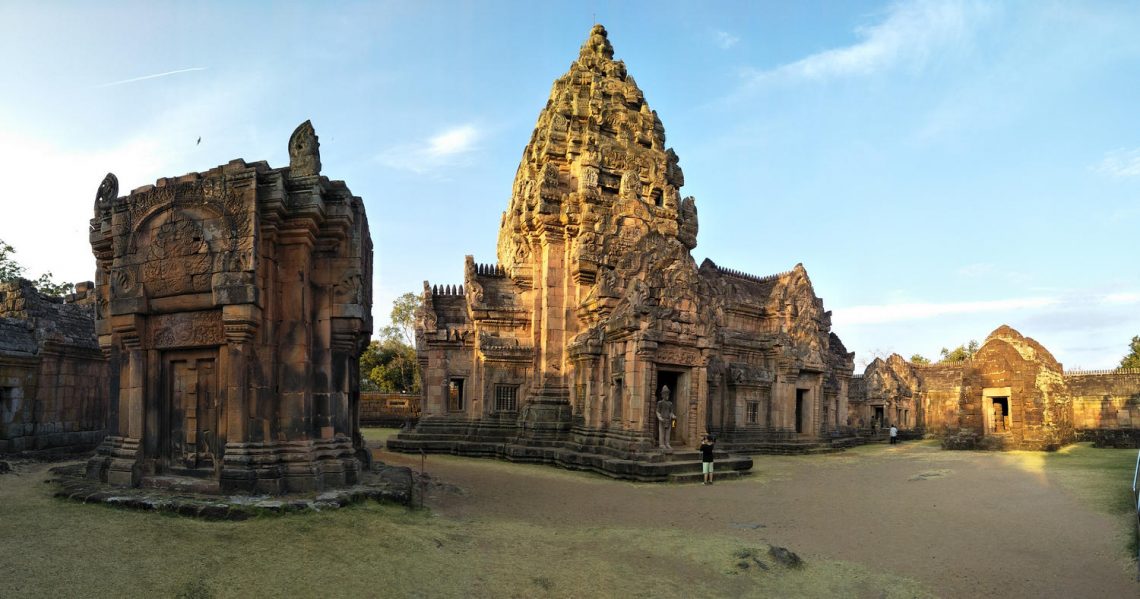 The evening sun is bathing the ancient ruins in a captivating gold-orange light. I wander through the chambers of one of the many 12th century Khmer temples in Thailand and admire quietly the excellent state of the original stone carvings on lintels and pediments. It’s serene. It’s me and maybe two dozen other visitors – local tourists geared up in their best outfits on a selfie spree. They do in fact add to the beauty of the scene.

“Khon diao?” I get asked over and over again by the Thai families and groups of friends. “Only one person?” Inconceivable that one would travel by themselves! “Mai sanuk!” “No fun!” But I’m good actually. I cannot recall when was the last time that I could enjoy the magnificence and spiritual power of Khmer architecture in such a peaceful setting. Maybe in December 2000 on my first trip to Cambodia?

Angkor Wat, the centre of the Khmer empire in medieval times, some 225 kilometres down the road, did attract 2.6 million tourists in 2018 only with a 12 % yearly growth rate in its back. 43 % of these visitors are from China, travelling in large groups of 100 or more people. It’s insane. It’s a “tourist stampede”. A pretty accurate term I came across lately.

Having visited Angkor 7+ times over the years my local colleagues and I need to get more and more creative to give our small groups a chance to have a somewhat appropriate temple experience. Meaning sharing sunrise in front of the main temple at 5:45 am with only 2.000 others as opposed to elbowing our way through Angkor Thom at 8:30 am. And from then on essentially cutting our way on bicycles through the forest to lesser known monuments of the Historical Park.

Phanom Rung in Isaan, North-East Thailand, is not only quiet, but an actual sanctuary. The original lingam as a representation for Shiva in the main chamber is not there anymore. But its replacement together with the ancient water conduit for the drainage of holy water and other liquids that are traditionally poured over the Divine symbol make it very easy to imagine how this place was actually used for Puja, for Hindu ceremonies. Good job, Thai conservation teams!

But how can it even be? A miniature Angkor Wat in Thailand?
Well, once upon a time the Khmer empire covered the better part of what is now mainland South-East Asia. At the height of its reign in the 12th century this included all of Southern Thailand as well as nowadays Laos and all of Isaan, the region I am currently having the pleasure to explore.

There are dozens of Khmer temples scattered all over Thailand. The private website www.khmer-temple.com is documenting nearly 40 of them with photo galleries. They come in various states of preservation and some of them do actually receive some visitors, a lot of them are far far off the beaten track though. “Well visited” in this context means a couple hundred visitors a day maybe as opposed to the 10- to 20.000 Angkor might receive in your average day in peak season.

In ancient times some of the most important temples in Isaan where connected to Angkor through a 250 kilometre highway. The Khmer had built a network of roads to connect their capital with the rest of the empire. One of these roads led from Angkor past the two temples Muang Tum and Phanom Rung to Phimai. A map of the time shows how the locations in nowadays Isaan have more or less been at the geographical centre of the Khmer empire. Along the road archaeologists found rest houses and hospitals.

Phimai at the end point of the ancient highway is the largest of the Khmer temples in Thailand. I didn’t get to see it due to logistical issues, but I visited nearby Phanom Rung and Muang Tum. All three of these temples were built between the 10th and the 13th century (construction was continuous) and are now on UNESCO’s tentative list for consideration as a future World Heritage Site.

Phanom Rung is said to be the most impressive and significant of the Khmer temples in Thailand and after many a visit to Angkor Wat I can confirm that the preservation of the stone carving work as well as the general state is really remarkable! One of the most important lintels (the one with reclining Vishnu) had made its way into a museum in Chicago some time in the 60ies, but was eventually returned (after many a negotiation apparently) when the restoration work in Thailand was finalized in 1988.

Angkor for all its mind-boggling beauty is lost to China I’m afraid. Come to Isaan if you want to get in touch with the splendour of what was once “the largest pre-industrial centre in the world”!

Read the story about the famous Vishnu lintel here:
https://en.wikipedia.org/wiki/Phanom_Rung_Historical_Park#Phra_Narai_Lintel 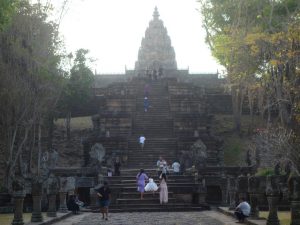 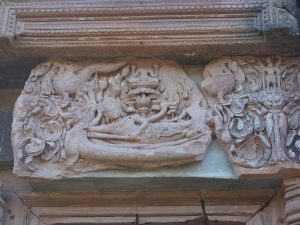 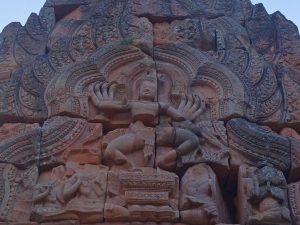 Shiva Nataraja, the Lord of the Dance 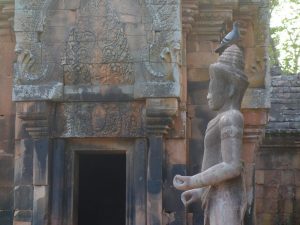 Me and the ruin 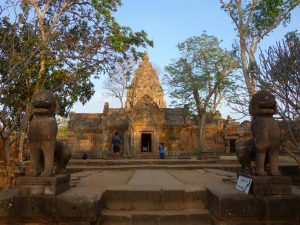 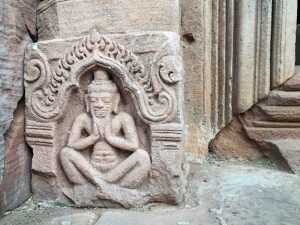 Yogis and hermits all over the place 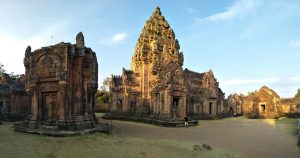 Panorama of the east side 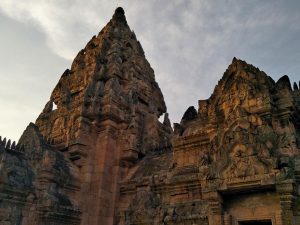 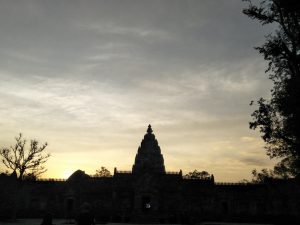 Sunset on top of the extinct volcano 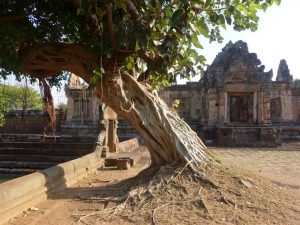 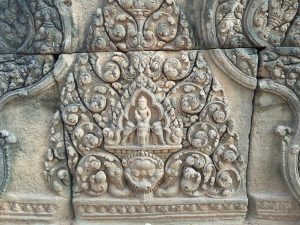 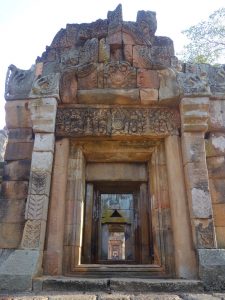 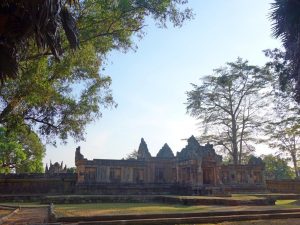 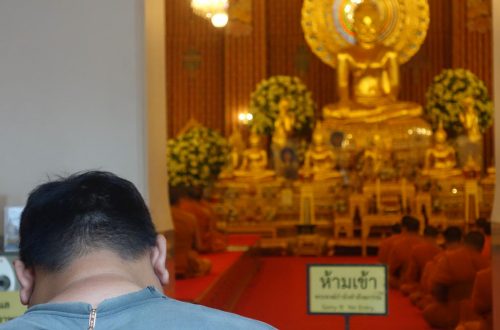 Back to Backpacking Thailand 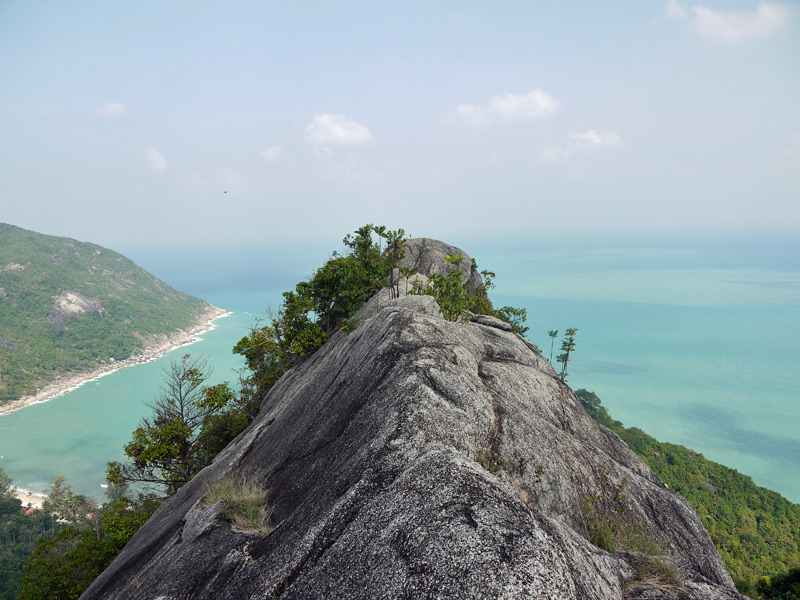 Hiking down the east coast of Ko Phangan 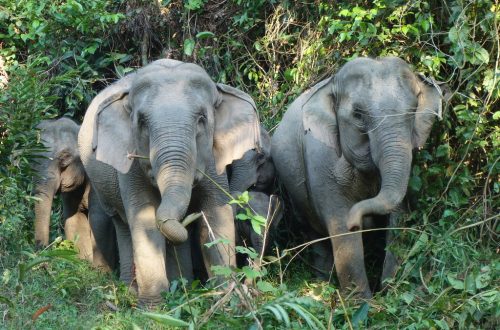